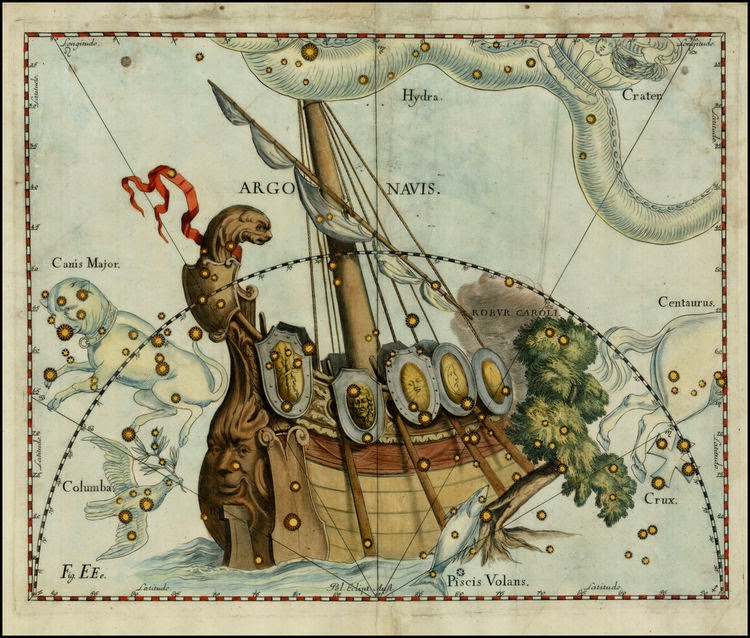 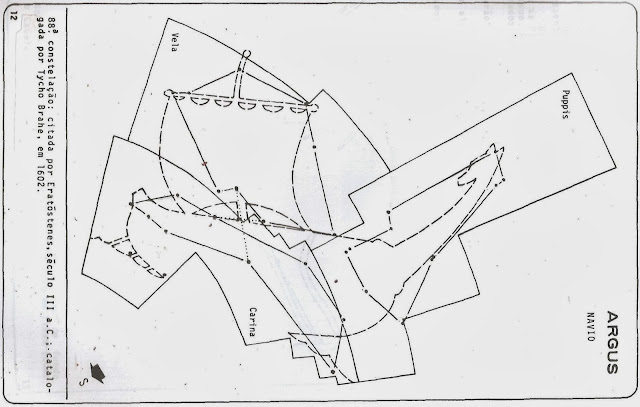 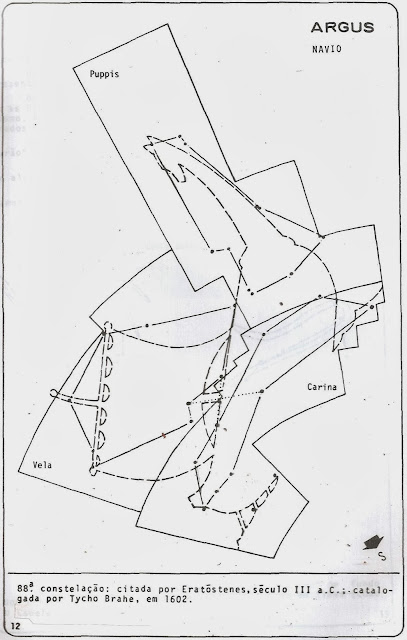 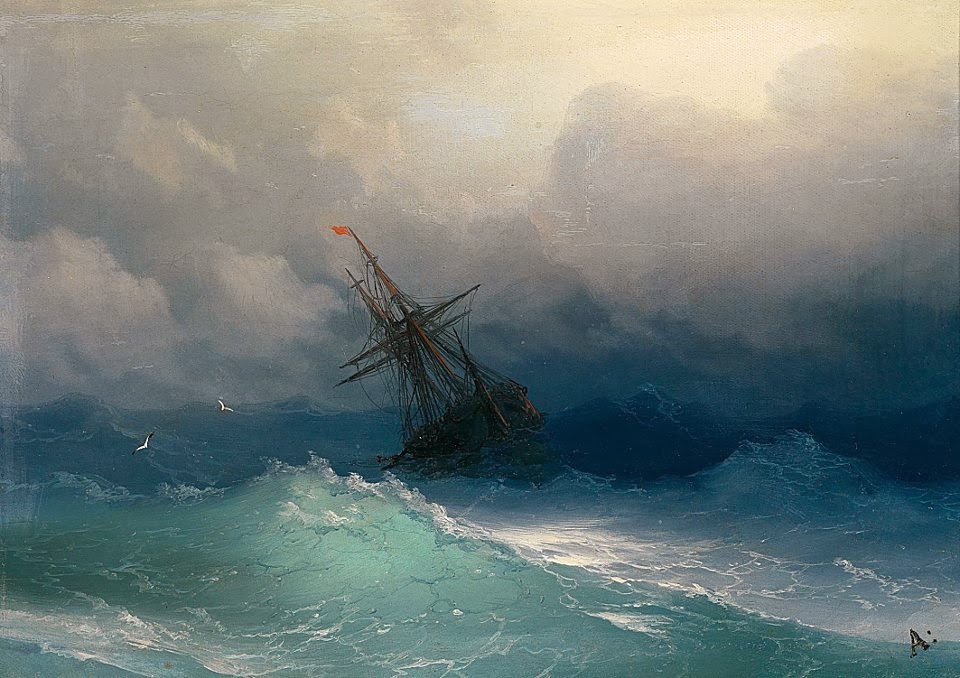 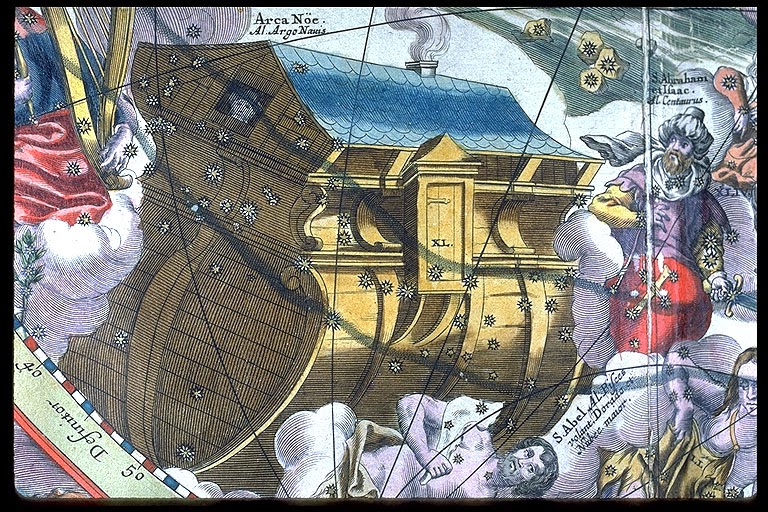 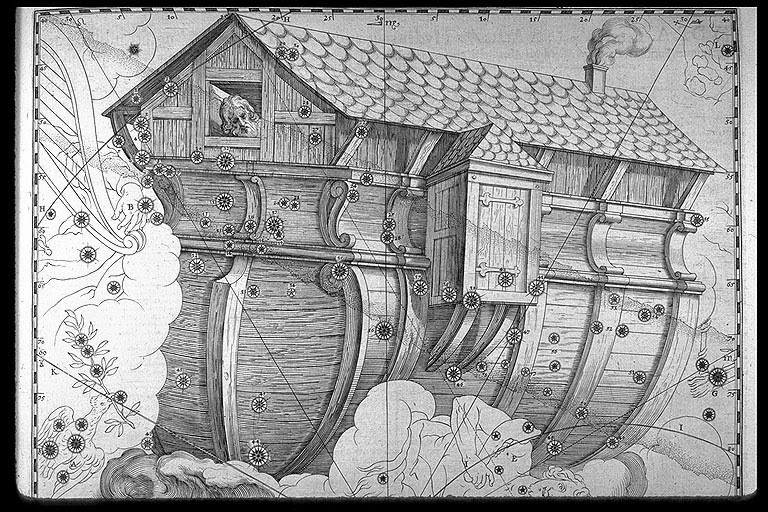 generally plain Argo, — erroneously Argus, from confusion with its genitive case, — and Navis, is the German Schiff, the French Navire Argo, and the Italian Nave Argo.
It lies entirely in the southern hemisphere, east of Canis Major, south of Monoceros and Hydra, largely in the Milky Way, showing above the horizon of New York city only a few of its unimportant stars; but it covers a great extent of sky, nearly seventy-five degrees in length, — Manilius calling it nobilis Argo, — and contains 829 naked-eye components. The centre culminates on the 1st of March.
La Caille used for it nearly 180 letters, many of them of course duplicated, so that although this notation was adopted in the British Association Catalogue, recent astronomers have subdivided the figure for convenience in reference, and now know its three divisions as Carina, the Keel, with 268 stars, Puppis, the Stern, with 313, and Vela, the Sail, with 248. This last is the German Segel.
La Caille, moreover, formed from stars in the early subordinate division Malus, the Mast, Pyxis Nautica, the Nautical Box or Mariner's Compass, the German See Compass, the French Boussole or Compas de Mer, and the Italian Bussola; and this is still recognized by some good astronomers as Pyxis.
p65From other stars Bode formed Lochium Funis, his Logleine, our Log and Line, now entirely fallen into disuse.
The Ship appears to have no bow, thus presenting the same sectional character noticeable in Equuleus, Pegasus, and Taurus, and generally is so shown on the maps. It was in reference to this that Aratos wrote:
This loss of its bow is said to have occurred
the Symplegades, the Cyanean (azure), or the Planctae Rocks at the mouth of the Euxine Sea. Yet Aratos may have thought it complete, for he wrote:
and
and it has often been so illustrated and described by artists and authors. The Alfonsine Tables show it as a complete double-masted vessel with oars, and Lubienitzki, in the Theatrum Cometicum of 1667, as a three-masted argosy with a tier of ports and all sails set full to the wind.
Mythology insisted that it was built by Glaucus, or by Argos, for Jason, leader of the fifty Argonauts, whose number equaled that of the oars of the ship, aided by Pallas Athene, who herself set in the prow a piece from the speaking oak of Dodona; the Argo being "thus endowed with the power of warning and guiding the chieftains who form its crew." She carried the famous expedition from Iolchis in Thessaly to Aea in Colchis,1in search of the golden fleece, and when the voyage was over Athene placed the boat in the sky.
Another Greek tradition, according to Eratosthenes, asserted that our constellation represented the first ship to sail the ocean, which long before p66Jason's time carried Danaos with his fifty daughters from Egypt to Rhodes and Argos, and, as Dante wrote [Paradiso, XXXIII.96],
Egyptian story said that it was the ark that bore Isis and Osiris over the Deluge; while the Hindus thought that it performed the same office for their equivalent Isi and Iswara. And their prehistoric tradition made it the ship Argha for their wandering sun, steered by Agastya, the star Canopus. In this Sanskrit argha we perhaps may see our title; but Lindsay derives Argo from arek, a Semitic word, used by the Phoenicians, signifying "long," this vessel having been the first large one launched.
Sir Isaac Newton devoted much attention to the famous craft, fixing the date of its building about 936 B.C., forty-two years after King Solomon.
With the Romans it always was Argo and Navis, Vitruvius [IX.5.2] writing Navis quae nominatur Argo: but Cicero called it Argolica Navis andArgolica Puppis; Germanicus, Argoa Puppis; Propertius, the elegiac poet of the 1st century before our era, Iasonia Carina [II.24b]; Ovid, Pagasaea Carina [Met. XIII.24] and Pagasaea Puppis [Met. VII.1], from the Thessalian seaport where it was built; Manilius, Ratis Heroum, the Heroes' Raft, Pagasaea
and others, Navis Jasonis, or Osiridis, Celox Jasonis, Carina Argoa, Argo Ratis, and Navigium Praedatorium, the Pirate Ship. While somewhat similar are Currus Maris, the Sea Chariot, the Currus Volitans of Catullus, who said that in Egypt it had been the Vehiculum Lunae.
It also was Equus Neptunius; indeed Ptolemy asserted that it was known as a Horse by the inhabitants of Azania, the modern Ajan, on the northeastern coast of Africa, south of Cape Gardafui.
The Arabians called it Al Safīnah, a Ship, and Markab, something to ride upon, that two or three centuries ago in Europe were transcribedAlsephina and Merkeb.
Grotius mentioned Cautel as a title for Puppis, "from the Tables," but he added Hoc quid sit nescio.
The biblical school of course called it Noah's Ark, the Arca Noachi, or Archa Noae as Bayer wrote it; Jacob Bryant, the English mythologist of the last century, making its story another form of that of Noah. Indeed in the 17th century the Ark seems to have been its popular title.
In Hewitt's Essays we find a reference to "the four stars which marked the four quarters of the heavens in the Zendavesta, the four Loka-pālas, or "nourishers of the world," of the Hindus; and that author claims these for p67Sirius in the east, the seven stars of the Greater Bear in the north, Corvus in the west, and Argo in the south. He gives the latter's title as Sata Vaēsa, the One Hundred Creators; all these imagined as forming a great cross in the sky. The differing Persian conception of this appears in the remarks on Regulus, — α Leonis.
The Chinese asterism Tien Meaou probably was formed from some components of Argo.
The constellation is noticeable in lower latitudes not only from its great extent and the splendor of Canopus, but also from possessing the remarkable variable η and its inclosing nebula.
Near the star z′ Carinae appeared, between March 5 and April 8, 1895, a nova with a spectrum similar to those of the recent novae in Auriga and Norma. 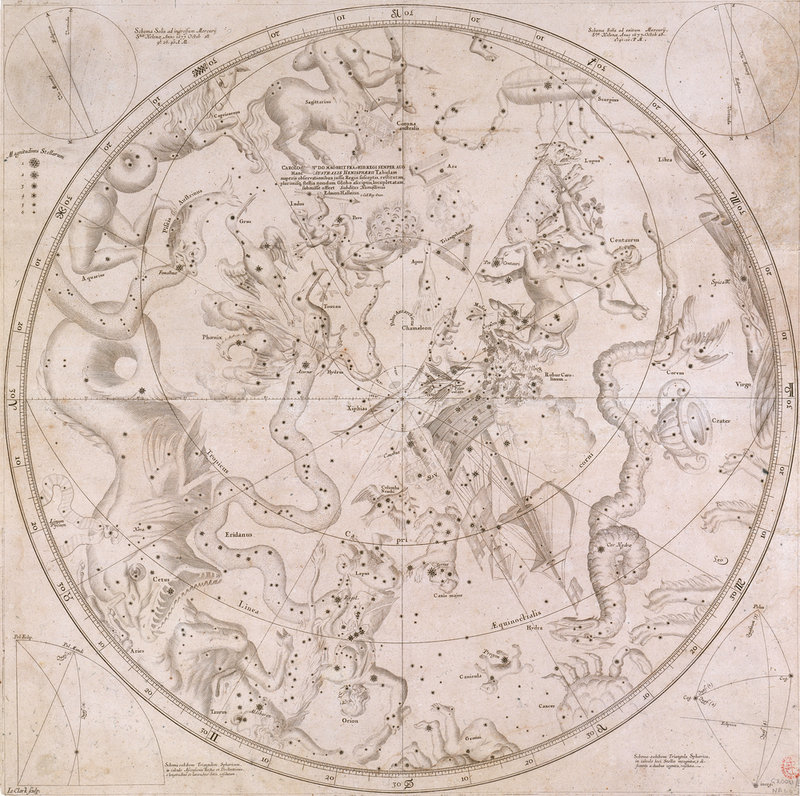 the Quercia of Italy and the Karlseiche of Germany, was formally published by Halley in 1679 in commemoration of the Royal Oak of his patron, Charles II, in which the king had lain hidden for twenty-four hours after his defeat by Cromwell in the battle of Worcester, on the 3d of September, 1651. This invention secured for Halley his master's degree from Oxford, in 1678, by the king's express command. But La Caille complained that the construction of the figure, from some of the finest stars in Ship, ruined that already incomplete constellation, "and the Oak ceases to flourish after half a century of possession," although Bode sought to restore it, and Burritt incorporated it into his maps, assigning to it twenty-five stars. Halley's 2d‑magnitude α Roborisº was changed to β Argūs, now in Carina.
Reeve's list of Chinese star-titles has only one entry under Robur —
Nan Chuen, the Southern Ship, θ, etc., but doubtful, incorrectly laid down. 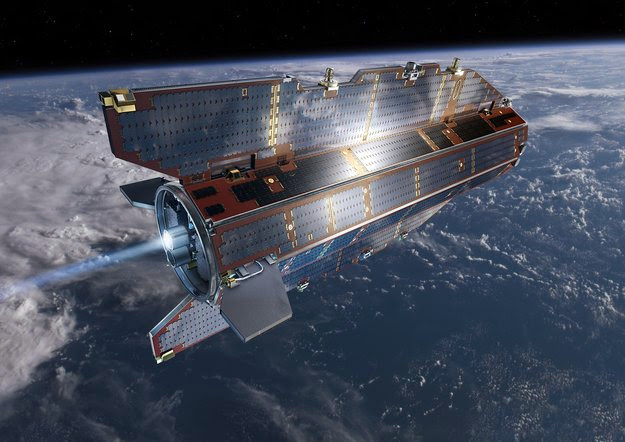 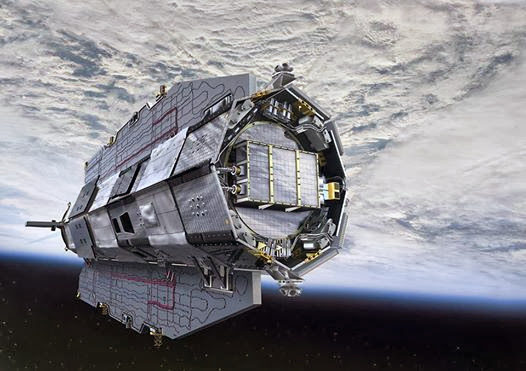